A BCS Conspiracy? Probably Not, But It Still Hurts 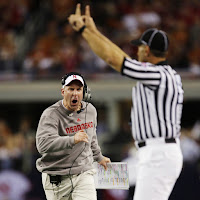 Fascinating article in the Omaha World Herald about the events following the Nebraska/Texas game as the powers that be converge in the Husker lockerroom.

From outside the doors, one word could be heard loudest: “Cheaters!”

Then Osborne strode back to the field, where Texas was wrapping up its trophy presentation. En route to midfield, Osborne said to a World-Herald reporter: “Where is Dan Beebe?''

As Osborne reached Beebe, the commissioner extended his hand. But Osborne didn't shake it. Osborne pointed at Beebe and said, “Would you go see Bo? Right now?''