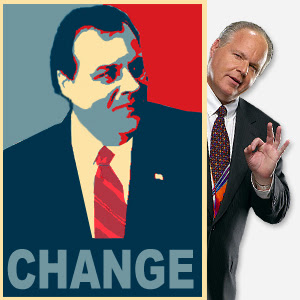 Recently, Rush Limbaugh and Michelle Malkin have sung the praises of newly elected New Jersey Governor Chris Christie. I've heard about his recent actions involving the state budget and was impressed with what I read, but didn't research much further. Then today I sat down and watched a 25 minutes video of Governor Christie speaking to a group of New Jersey's mayors. He spoke without notes or teleprompter.

To put it plainly, I'm sold.

I can say without equivocation that his words are what I have been waiting to hear my entire adult life from a politician. This is what I must assume young conservatives and libertarians felt when they first heard Barry Goldwater speak in the 1950s. The video is here (Hat tip: Ace) and if you're short on time, just watch the last 10 minutes. Christie tore apart the usual political platitudes. He didn't lecture the populous on what they needed to do, he lectured the government on what it must do. And he isn't making the standard promise to "save us from the pain." Far from it. He points out that pain is on the way, but it's the only option.

Now, I'm not a genius at reading people. I've been wrong before, but everything I've seen from Governor Christie tells me this guy is destined for higher office. It's like having Ronald Reagan's brain inside William Taft's body. It's early in the game, but Christie might indeed be the one we've been waiting for.
- March 03, 2010
Email ThisBlogThis!Share to TwitterShare to FacebookShare to Pinterest
Labels: Chris Christie, Conservatism, Michelle Malkin, Rush Limbaugh
Newer Post Older Post Home