This man is going to be president someday. You can take that to the bank.

Michelle Obama Gets Back To Her Black Panther Roots

As the Obamas continue to embarrass our country in front the the U.K. Monarch, there at least is an opportunity for a good laugh thanks to a well-place plant: 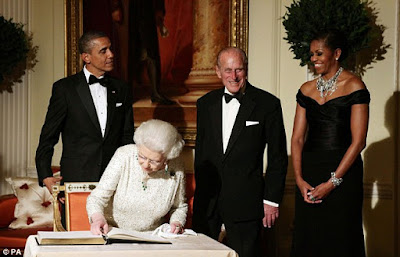 Michelle getting back to her Black Panther roots. "Kill the pigs!"
- May 26, 2011
Email ThisBlogThis!Share to TwitterShare to FacebookShare to Pinterest
Labels: Barack Obama, Black Panthers, UK


I might just move to Kentucky.
- May 23, 2011
Email ThisBlogThis!Share to TwitterShare to FacebookShare to Pinterest
Labels: Conservatism, Libertarianism, Rand Paul, Socialism

Not too long ago, he looked like the great GOP/Tea Party hope: a Midwestern governor who had his state running like a well-oiled machine; conservative; dull; just what America needs after four years of megalomania. Then he started making odd statements...saying social issues should take a back seat; generally I agree with that, but there's no reason to pronounce it when you need the support of social conservatives; and saying he couldn't really debate Obama on foreign policy. Folks, I could debate Obama on foreign policy and win in a route. Thus, his star began to fade, but what ho? The establishment, elite GOPers started to love him. Yikes! Now we find out (supposedly) that his wife doesn't want him to run. Look, I'm no more sexist than any other man but this doesn't exactly help his alpha-male rating.

So it's probably for the best that he has decided not to run. Jeff Goldstein over at Protein Wisdom explains why better than I can: (emphasis mine)

The truth is, at some other moment in time, Daniels may have made a good GOP candidate. But this is an election where, win or lose, conservatives have to make their case and present a clear, unambiguous, and unapologetic defense of liberty, individualism, free market capitalism, natural rights, and the rule of law proceeding from the Constitution. Whether you like Daniels or not — and many swear by him — it is clear that his particular worldview is that conservatives must bracket social and “wedge” issues; strain to be liked (as opposed to merely being likeable); and bend over backwards to understand and in some ways accommodate the opposition.

This was the same counsel we received by a cowed GOP establishment in 2008 after McCain, who ran just such a campaign, was soundly whipped. And it’s the same advice being repeated back to us — by mostly those same people — that we’re to heed now that the 2012 election season is in its infancy, lest we be marginalized as extremists and rhetorical Visigoths.

No offense, “pragmatists.” But pound sand. We need to wake Americans up and give them a definitive choice. Those who would tell us the era of Reagan is over — that conservatism / classical liberalism itself needs be re-imagined as a sort of big government, low-tax “compassionate” nannystate — are not among those opinions we should bother with.

A great piece from Gene Healy over at Reason:

You're not a real president until you fight a metaphorical "war" on a social problem. So, to LBJ's "War on Poverty" and Reagan's "War on Drugs," add Obama's "War on Fun."

Poker: Last month, the Department of Justice shut down five major online poker sites, seizing their domain names, issuing arrest warrants for executives and seeking billions of dollars in asset forfeiture. One defendant faces jail time of up to 65 years for helping people play cards over the Internet.

Food: A year ago, Obama's FDA announced its plan to "adjust the American palate to a less salty diet," ratcheting down the amount of sodium allowed in processed foods. It's "a 10-year program," an agency source said, designed to change "embedded tastes in a whole generation of people." But even "real food" aficionados who shun Cheetos aren't safe from the reformers' zeal. On April 20, FDA agents and federal marshals carried out a 5 a.m. raid on an Amish farm in Pennsylvania, the culmination of a yearlong sting operation aimed at wiping out the scourge of unpasteurized milk. "It is the FDA's position that raw milk should never be consumed," an agency spokeswoman insisted.

C.S. Lewis once wrote that "of all tyrannies, a tyranny exercised for the good of its victims may be the most oppressive." Rulers who just want to exploit us may relax once their greed's sated.

But "those who torment us for our own good will torment us without end, for they do so with the approval of their own conscience," Lewis said.

One of the best showmen in the history of wrestling.

An interesting article on Real Clear Politics about the governor of my home state and his role in the GOP Presidential race. Omaha's TV market flows into western Iowa so his endorsement will get plenty of play leading up to the Iowa Caucus. Nebraska Gov. Dave Heineman is pretty savvy from what I can tell from this distance. Let's hope he chooses wisely.
- May 16, 2011
Email ThisBlogThis!Share to TwitterShare to FacebookShare to Pinterest
Labels: Dave Heineman, GOP

While cancer may have attacked his esophagus, his "voice" is still crystal clear. Christopher Hitchens barely breaks a sweat as he destroys Noam Chomsky's latest piece of twaddle. (Hat tip: Jim Treacher)

It's no criticism of Chomsky to say that his analysis is inconsistent with that of other individuals and factions who essentially think that 9/11 was a hoax. However, it is remarkable that he should write as if the mass of evidence against Bin Laden has never been presented or could not have been brought before a court. This form of 9/11 denial doesn't trouble to conceal an unstated but self-evident premise, which is that the United States richly deserved the assault on its citizens and its civil society. After all, as Chomsky phrases it so tellingly, our habit of "naming our murder weapons after victims of our crimes: Apache, Tomahawk … [is] as if the Luftwaffe were to call its fighter planes 'Jew' and 'Gypsy.' " Perhaps this is not so true in the case of Tomahawk, which actually is the name of a weapon, but the point is at least as good as any other he makes.