New Sandwich Hits The Menu At The Congressional Commissary

In 2008, future Speaker John Boehner called the TARP Bill a shit "crap sandwich." Regardless, in the name of "bipartisanship" (the mother's milk of the Devil) he took a big bite and smiled.

And now, speak of the Devil, we have an agreement on the debt ceiling that has been dubbed by the Congressional Marxist Black Caucus as a "sugar-coated Satan sandwich."

Geesh! Somebody needs to feed our representatives a little better. 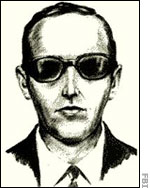 Via Drudge, the FBI says it has a new lead in the case of hijacker D.B. Cooper which they describe as promising and targets someone never suspected before. I've always loved the D.B. Cooper story. In American folklore, he's right up there with Jesse James. Would be awfully exciting if they actually found out who he was, especially if he's still alive.
- July 31, 2011
Email ThisBlogThis!Share to TwitterShare to FacebookShare to Pinterest
Labels: Pop Culture

Fly Me To The Moon... And Cover It With Yogurt

The great Paul Ryan (@RepPaulRyan) explains the math of the contemptible Harry Reid.

Chris Christie Tells D.C. To Put Up Or Shut Up

I'm a few days late on this (Hat tip: Hot Air), but here you have an example of why so many folks want Chris Christie to run for president: straight talk. You know, that kind of talk that John McCain pretends to do but Governor Christie actually does. Granted, in this clip he tries to lump the GOP in with the Democrat cabal, but regardless it's still good stuff. A Perry-Christie ticket would give me enough tingly feelings to put Chris Matthews to shame.

NASA satellite data from the years 2000 through 2011 show the Earth's atmosphere is allowing far more heat to be released into space than alarmist computer models have predicted, reports a new study in the peer-reviewed science journal Remote Sensing. The study indicates far less future global warming will occur than United Nations computer models have predicted, and supports prior studies indicating increases in atmospheric carbon dioxide trap far less heat than alarmists have claimed.


However, this line from the Forbes story is quite funny:


The new findings are extremely important and should dramatically alter the global warming debate.

HEH! Yeah, that'll happen. I'm sure Al Gore is ready to stop being a charlatan and actually do something useful with his life. Nothing is going to change. The Democrats will still push the fraud and the establishment Republicans will play along so the press will someday (fingers-crossed!) like them.
- July 28, 2011
Email ThisBlogThis!Share to TwitterShare to FacebookShare to Pinterest
Labels: Al Gore, Climategate, Global Warming, Liberal Fascism

The Mask Slips...And Falls Off

This clip should require no commentary on my part:

- July 25, 2011
Email ThisBlogThis!Share to TwitterShare to FacebookShare to Pinterest

Carnage In Norway Comes With Many Lessons

When there was word of a bomb blast in Oslo, Norway, I figured it was probably Islamic terrorism. And why not? That's a very rational conclusion to make. Even the New York Times agrees. Over the past two decades, who is most often responsible for such incidents? To say this is a knee-jerk reaction is disengenuous, but it's a charge that is still made by many apologists for Islamic Jihad.

When the news hit that there was a man dressed as a policeman shooting up an island full of children, I had a feeling this wasn't quite what we thought. Jihadist will kill any innocents, but it still didn't seem like their MO. Now we find out that it was a Norwegian with apparent right-wing leanings behind these horrible acts. So, if this information holds true, he is essentially the Norwegian Timothy McVeigh.

This has led to crowing from many on the American Left. Charles Johnson is going after his favorite targets in Pamela Geller and Fjordman (even going so far as to speculate Fjordman was the shooter). What does this tell you? Why would the fact that the culprit is NOT Muslim give them joy? How can someone be so ideologically driven to take such a position? When I heard about the bombing I didn't say, "Gee, I hope this was done by Muslims!" My reaction was "I wish this hadn't happened."

Still amazed that one man did all this (won't be surprised if we find he had help), but just like many can't believe one man killed JFK, we have to accept that fact that one man can make a huge impact through violence. What's really amazing is that it doesn't happen more often. All it really takes is will.

Here's a screencap of the voting rolling. These 51 "yeas" are Senators that have decided America can go to hell: 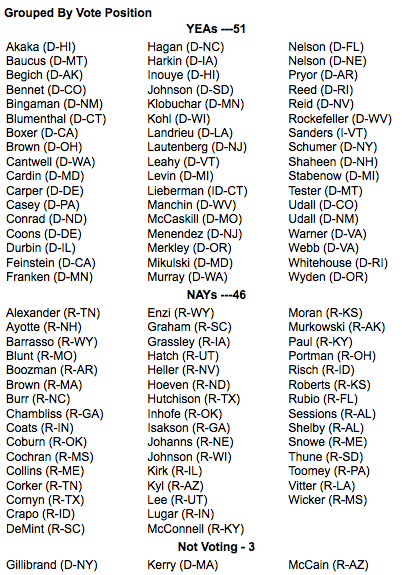 - July 21, 2011
Email ThisBlogThis!Share to TwitterShare to FacebookShare to Pinterest

Screw It, Let's Light This Candle: Rick Perry For President

I've always said it's ridiculous to make any endorsements or predictions in any presidential race until the calendar turns over to the actual year of the race, but times have changed, the world moves at an alarmingly fast pace and I'm no anti-technology, Thoreau-worshiping sycophant. My hand is forced...

My reasons are grounded in ideology and pragmatism.

1) He's a governor, an executive: This is an attractive quality after three years of Barack Obama who not only has no executive experience, he revels in the fact and tries to run the country like a college professor playing a zero-sum game.

2) He's an exceptionally good governor: While the country flounders, Texas thrives. Is it all him? No, but a lot of it is. He's led Texas as a conservative, keeping taxes low and keeping the economic environment attractive to businesses.

3) (And this may be most important) He's unapologetic: In his speech to the Republican Leadership Conference he declared Republicans should "stop apologizing" for their conservative views. This is the kind of thing we need in 2012. If the GOP nominates another candidate like John McCain, who spends all his time apologizing for being a Republican, we don't have a chance.

4) Looks: Let's face it, Thad McCotter is cool as sh*t but he's not gonna get elected President unless he can time-machine himself to the age of mutton-chops. (Look out, Chester A. Arthur!) While Romney and Palin are probably our Prom King and Queen, Perry is not far off. I don't like it any more than you do, but you have to "look the part" as they say. Perry does.

5) He can win: Electability is an acceptable criteria only if taken hand-in-hand with the candidate's stands on the issues. Perry is electable and a fiscal conservative. That's all I'm really asking for this time around.

1) He used to be a Democrat: True, he was...a Texas Democrat, in the 1980's. That right there is more conservative than half the Republicans in Washington today. Ex-Senator Phil Gramm was also a Democrat at one point and I don't think his conservative bona-fides are much in question. Hell, put ex-Democrat Perry up against life-long Republicans like John McCain, Lindsey Graham, Olympia Snowe, Dick Lugar and others and tell me who's the most conservative. You don't even have to pull out the "Reagan was once a New Deal Democrat" excuse.

2) He's another Bush: He's a Texas Governor, just like the last Republican president who left office very unpopular. This is much ado about nothing. Very interestingly, there was a story floated a few weeks ago in the Walter Duranty Times that the Perry people and the Bush people aren't too fond of each other with insinuations that Bush would hate to see Perry as President. If true, it's somewhat of a good sign. While we all miss George W. Bush during these years of Obama, he was a big-government Republican who started us on this road to ruin. If Perry isn't thought of highly by the blue bloods, that's a point for Perry, but there is a possibility it's a planted story by the Perry camp to put distance between the two. The "stop apologizing" line may very well have been a shot at the fabled "compassionate conservatism." Either way, points for Perry.


"But wait, he once raised taxes in one area to cut them in another and he once said 'mo-fo' and he's not really a conservative, and people who know him think he's dumb and those gay rumors...we're all doomed!!"

Or put another way, HE'S NOT PERFECT! The GOP cannot go about choosing a nominee hoping to find someone who is absolutely perfect and Reagan-incarnate because that person doesn't exist. You can find fault with every candidate or possible candidate in the field. If the GOP tries to, in essence, find their Obama (i.e. their Messiah), we'll just screw ourselves and allow the MSM to choose our candidate just like it did in 2008. The GOP has to nominate the best candidate who is a conservative on the big, macro issues facing this country.

I leave you with one cowardly caveat: If Sarah Palin gets into the race, that could blow everything up. Frankly I hope she does. I want there to be a lot of quality candidates and let the eventual nominee earn the spot.

All Politics Isn't Local, But All Tyranny Is

RightScoop has the story on the city council of an Arkansas town that wants to pass an ordinance that makes it illegal to form a group to discuss city business without first getting council approval.

It shows that while we need to clean house in Washington, we also need to clean house on our front stoop. Every year you hear of stories where the local police or bureaucrats shut down a kid's lemonade stand or remove a neighborhood basketball hoop that's too close to the street or what have you. Most of us don't think about these local politicians unless we're really involved in the community, and I'm no different, I admit. I do my own thing, I keep to myself, run in the circles I run in, but I couldn't tell you what happened at the last County Commission meeting. Maybe I should, before they take my lemonade stand...and my First Amendment.
- July 16, 2011
Email ThisBlogThis!Share to TwitterShare to FacebookShare to Pinterest
Labels: First Amendment, Politics

Tweeted about this yesterday but wanted to get it on the blog record.

Stockholm Syndrome is when a kidnapped person starts to become sympathetic with his captors' nefarious cause to the point of joining them. It became a household phrase after Patty Hearst was kidnapped by the Symbionese Liberation Army and seemingly joined them.

With that, I'm coining a new phrase: "Reverse Stockholm Syndrome." The phrase is in honor of Congressman Paul Ryan. He's the one man that is offering a concrete plan to save this country from crushing debt and the horrors of European socialism. He's not holding anyone hostage and he's not trying to hurt his fellow countrymen, he's trying to help them in fact. Yet there are those that are acting like he is holding them hostage and he is trying to hurt them.

- July 10, 2011
Email ThisBlogThis!Share to TwitterShare to FacebookShare to Pinterest

The Fourth of July: