Via Politico, the Obama Administration has decided not to ask the 11th Circuit Court of Appeals for a rehearing, thus hinting it may be ready to pass this hot-potato to SCOTUS:

The move puts the Supreme Court in the difficult position of having to decide whether to take the highly politically charged case in the middle of the presidential election.


Not for Anthony Kennedy...he's in a position to get the best table at every restaurant in town.
- September 26, 2011
Email ThisBlogThis!Share to TwitterShare to FacebookShare to Pinterest
Labels: Barack Obama, Health Care, SCOTUS

Blinding Me With Science!

Big week in the world of stuff that most of us couldn't comprehend with 100% of our brains.

I always knew that jerk Einstein was an idiot. Can't go faster than the speed of light? You big dummy!


Everything in the universe has to be rethought? You mean like whether I'm pretty? Hmmmm...

If that weren't enough, I caught this video from Kurt Loder's Twitter feed on the McGurk Effect of sight and sound. It's like a magic trick that your brain plays on you and no matter how hard you try, you can't beat the trick.

I need to go lie down.

LOL! Pic Of The Day 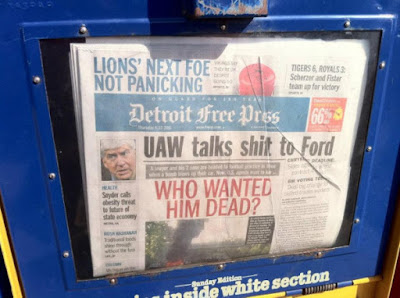 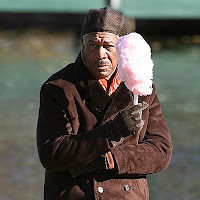 Morgan Freeman is a liberal. No surprise, I assumed it. It's cool. It never bothered me. I enjoyed Shawshank Redemption as did millions of others. Freeman's role in that film is one for the ages, parodied in pop culture to the point that even if you haven't seen the film, you at least know the gist. Yet, Freeman seems to believe that while millions of people enjoy his work in countless films (and the "Electric Company"), they also kinda wish he would hang from a tree.

Puzzling, to say the least. There are countless theories on why Hollywood celebrities think the way they do. One strong theory is that it all comes down to guilt. You make millions of dollars pretending to be someone else on camera, you live the high-life, so you feel you must become a warrior for the downtrodden, the environment, anyone that seems to be in opposition to America, etc. Another theory is that when you live in a pretend world, you lose all sense of reality. Or maybe to be a good actor, you just need to be a elitist jerk.

Whatever the case, it's gonna be hard for me to take Freeman seriously in his future endeavors. It's one thing to know that the actors you watch on screen don't agree with you politically, it's quite another to know that they hate your guts.
- September 24, 2011
Email ThisBlogThis!Share to TwitterShare to FacebookShare to Pinterest
Labels: Elitism, Hollywood, Pop Culture, Tea Party

Yet, like any good liberal, he blames the wrong side for the failure. Clinton and Barak (that name is always trouble!) offered the Palestinians 99.9% of the store and Arafat refused, for you see, there would still be Jews living on earth, there would still be a place called Israel. He couldn't live with that. Same with the thugs that followed him. Even an old war-horse like Ariel Sharon was ready to take the first big step into Israel's oblivion and it wasn't enough for the Palestinian Authority.

And, of course, Clinton wants us (and himself) to believe that it's Israel's fault. Many on the Left believe if there was no Israel there would be peace in the Middle East, and in a sense they're right. When Hitler controlled nearly all of Europe, it was a pretty stable region until the Brits and Americans messed it all up.


Anywho, one has to wonder what the end-game will be: Israel's destruction by a thousand cuts or a final all-out war in the region?

The great Andrew Klavan (who unfortunately is moving behind Glenn Beck's pay-wall) has this greatest hit that offers a one-state solution:

Is The Electorate Coming My Way?

Before Rick Perry announced his run for the presidency, I posted a blog entry supporting him for President. My reasons were pretty simple: he's got a good record of executive leadership and he's not an apologetic conservative like George W. Bush or worse yet, John McCain. Now, readers of this blog know I'm not into the G-d stuff, but I don't see it as terribly relevant. Ronald Reagan was anti-abortion, but somehow abortion is still legal, i.e. we're electing a president not a dictator. We're not going to become a theocracy just because our president is a devout Christian.

Since Perry has begun his campaign he's appeared in two debates and he's been less than stellar. He has the right stand on the issues and he knows the answers to the debate questions, but he hasn't been expressing himself very well. Rush Limbaugh aptly pointed out that he seems to get either fatigued or bored (or both) as the debates go along, with his best stuff at the beginning and he then tails off. Yet, despite these anemic performances, he's still surging in the polls. Why?

Two theories: 1) Not enough people are paying attention just yet and are still responding to their preconceived notions of the candidates. 2) The electorate is suffering from a cult-of-personality fatigue in that Barack Obama has been so much style over substance with sweeping oratory and grand speeches with little results that the electorate is to the point where it doesn't care of Rick Perry can put two words together as long as he gets the boot off the economy's throat.

I'm firmly planted in the camp of the latter theory and I'm starting to think a lot of people are coming my way, though the former is probably still the lion's share of why Perry continues to stand atop the polls. Either way, it's good news for Perry. Now he just needs to get a good debate coach to hone his skills.

Awful headline. I do apologize.

Anywho, Barack Obama got about as clear a message as you can get from the voters of New York Congressional District 9 sending Republican Bob Turner to Washington, D.C. to fill out Anthony Weiner's term.

Now I plead with the GOP presidential candidates: Get off the Gardasil and start talking about the issues that matter. If the debate moderator ask a stupid, irrelevant question, ignore it and talk about how our country is being destroyed by a man with a G-d complex who is completely out of touch.

Social Security And What We've Become


So the question today is not simply whether Rick Perry will be punished or rewarded for showing the honesty even many liberal commentators once pined for. The more interesting issue raised by this historical investigation may be the fate of the Democratic party and the media. Where today are the liberal and centrist Democrats who only yesterday called Social Security a Ponzi scheme and supported bold reforms? Where now are the columnists and editors at Newsweek and the New York Times willing to reward truth-tellers and to criticize reporters who cover for cowardly politicians? The fate of Rick Perry’s blunt talk may tell us more than we want to know, not only about Social Security, but also about who we are and what we have become.