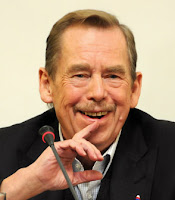 It's not often words like "playwright" and "anti-communist" are applicable to one individual, but alas there was only one Václav Havel.

Smart readers of this blog know his general bio and his role in bringing about the fall of the Iron Curtain along with giants like Reagan, Walesa and Thatcher. He "fought the good fight," as they say, for years in his native Czechoslovakia when many of his contemporaries (not wrongly) fled to the West. I was a teenager when the Communist apparatchik fell in that country and not surprisingly it was the first time I had heard of Havel. As someone of Czech heritage (Bohemia to be precise), I became enthralled with his life as a dissident and his eventual rise to the Presidency of Czechoslovakia/Czech Republic.

Men more learned than I can give him a better sendoff. ("Absurdistan." Love it!)
- December 19, 2011
Email ThisBlogThis!Share to TwitterShare to FacebookShare to Pinterest
Labels: Free Speech, Vaclav Havel

- December 15, 2011
Email ThisBlogThis!Share to TwitterShare to FacebookShare to Pinterest

Let's forge some documents that say he was born in the United States and have him run for President:

Doubt If Doubt Itself Be Doubting

As the name of this blog not so subtly implies, I'm a libertarian. Note however that I just wrote that in the lower-case. The Libertarian Party has been a joke, like most third parties, for a number of years. The problem hasn't been on the fiscal side, but more north, south, east and west of the border, i.e. foreign policy. The Libertarian Party view of foreign policy/military matters is a well-dressed, well-read, think-tanky version of Ramsey Clark's Cavalcade of Petulant Proles (or CCCP for short). America should stay out of everyone's business no matter how much it may affect our business. Hell, we probably brought it on ourselves, but if it really does become a big problem, the best thing to do is to further turn inward: no military bases, no opinions, no outreach, nothing. That's the Libertarian way.

For me, libertarianism has always meant rugged individualism and voluntary communal action. In other words, you do your own thing but when problems arise, you do what you think is best along with your like-minded peers in accordance with a few basic principles. What happens in Europe, the Middle East, Australia, et al does affect me and affect my country.

But you've no doubt heard all those arguments and I abhor regurgitation. What's on my mind is the recent statement by Rick Perry that our Congress should be part-time and we'd be better off if it were as such. Gut reaction is great idea, but again, that's the gut not the brain. Of course, the President has no recourse to do this due to that whole separation of powers thing, but libertarian that I am, I agree with Mark Levin's statement that every day that the Congress meets we lose a little bit of our liberty.

The gang at AEI say the Congress meets too little:

“The big problem is that members of Congress aren’t spending enough time in Washington. And this current House has the smallest number of days in session in modern memory, and they’ve pretty much pushed a lot of urgent matters, including many of these budgetary matters, off the table.”


Um...so if Congress had more days in session they'd deal with more pressing matters and not those that line their pockets and appease their base? Maybe I'm just a pessimist but I'm gonna have to call bullshit on that one. The Congress goes to the highest bidder. You have your principled men like Senator Jim DeMint, but for the most part, Harry Reid is the die-cast of the members of this legislative body. Power is paramount.

A part of me says let's do it, let's limit the legislative branch and "get things done." Another part of me says democracy is hard and sometimes self-defeating, but it's the best we've got and let the chips fall where they may.

Some will take my intellectual quandary and say, "see, you're no libertarian" but I think it makes my position stronger still. Libertarianism can't be real if it becomes intransigent dogma like that of Lew Rockwell and Ron Paul. Philosopher David Hume (who basically proved all philosophy is crap, but that's another blog post for another time) said "A wise man proportions his belief to the evidence," while Lord Byron said "There is something pagan in me that I cannot shake off. In short, I deny nothing, but doubt everything." I fancy myself a mix of these two statements. Perhaps I should be known as the Nihilist Popinjay.

It's a rainy day in the desert town of Las Vegas. Time for some mood music. 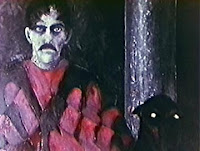 The popular answer to the worst film ever made is Ed Wood's Plan 9 From Outer Space, and it is indeed worthy of that title. But within this dumpster fire of a film one can still glean some knowledge of the art of filmmaking.

Undoubtedly, the worst film ever made is Manos: The Hands of Fate. A film made on a bet in El Paso, Texas, it was rescued from oblivion by the gang at MST3K and has developed a cult following ever since. Now, a Florida State film student, Ben Solovey, is trying to do what needs to be done: a full restoration of the film.

"There's a certain nostalgia factor to it," Solovey says. "If you've ever picked up a video camera and tried to make something, you recognize Manos: The Hands of Fate."

The filmmaking mistakes in Manos are legion. Moths flock toward the camera's lights during night scenes, slates creep into the edge of frames, and actors look gape-jawed for direction when they're not busy forgetting botched dialogue. It's a movie to be appreciated for its sheer general disregard for anything that constitutes filmdom. You've heard of a movie that seems made for its own sake — if there's such a thing as a movie made against its own sake, this is it. For filmmakers, Solovey suggests that Manos is a chance to remember their early passions by seeing someone relive all their own dumb blunders. And isn't that, more than anything else, the definition of a guilty pleasure?


History's greatest mistakes must not be forgotten, they must be enjoyed for their lack of splendor, lack of intelligence, lack of any and all benefit to society. We must never forget the lowest points of mankind and Manos is truly anti-Art. Kudos to Solovey for making sure history never forgets.

For some more background on Manos, here's a short film on YouTube called Hotel Torgo. Enjoy! (but probably not, though)
- December 12, 2011
Email ThisBlogThis!Share to TwitterShare to FacebookShare to Pinterest
Labels: Pop Culture

There's been a lot of debate over President Obama's feelings about the job he holds. Some theorize he really doesn't like being president while others think he's having the time of his life. I tend to lean toward the latter as it appears the head of the executive branch is taking every opportunity he can to have a good laugh in private.

There have been a number of odd little occurrences. Giving Britain back a bust of Churchill; bowing to the Saudi King; sending Netanyahu and the Dali Lama out the back way; giving Queen Elizabeth II an iPod full of his speeches and audio books; and I'm sure a few other events I'm forgetting.

Now just the other day the president decides, hey, let's celebrate Hanukkah early and instead of lighting one candle a day per tradition, let's just light them all now and then party down!

I'm not saying Obama doesn't like the Jews, but I'm not not saying it either.

But the pièce de résistance is something caught by The Blaze and brought to my attention by Twitter buddy @Robert23Hersey. Obama gave a rather anti-capitalist speech this past week in a city called Osawatomie, Kansas. Ever heard of it? I hadn't, and it's rare that the president makes a speech in a city I haven't heard of. It can happen. You research demographics and maybe say this would be a good place to get some exposure leading up to 2012. Who knows, maybe.

But the name Osawatomie does indeed ring the bells of some more literate in the history of the Weather Underground: 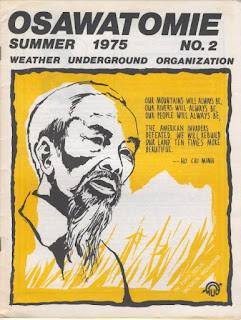 That's right ladies and germs, "Osawatomie" was the name of the Weather Underground's publication.

Folks, we're a long way past laughing these things off as coincidences. Obama is have a laugh, and he's laughing at us.
- December 10, 2011
Email ThisBlogThis!Share to TwitterShare to FacebookShare to Pinterest
Labels: Barack Obama, Bibi Netanyahu, Jews, UK, Weather Underground
Newer Posts Older Posts Home
Subscribe to: Posts (Atom)