The Future Of Blogging (Here At Least)

Readers of this blog will note that I went all minimalist this weekend. I've been pondering whether to continue blogging at all as I fear the the medium itself may be dead or dying. Of course, not for everyone, but the gap between the great blog sites and the second-tier sites has widened and with the ascension of Twitter, many of us (myself included) have left our blogs to rust while we spend our days sending out little quips in the forms of tweets and retweets.

Not that there's anything wrong with that. Twitter fits my personality which has always been to make quick, off the cuff remarks. Manifestos have never been my strong suit. But there is a place for blogging when one wants to make a larger point. I've decided it's time to scale back on the site, get rid of the useless widgets and make this blog more of a daily journal in the style of James Lileks. Of course, that will take some commitment as well, but nothing ventured...

I'm also on the fence as to whether I should even call myself the Libertarian Popinjay anymore. While I'm still libertarian in spirit, should Obama win another term I may end up embracing existentialism (assuming that is what I think it is).

This Week In Racism

I have seen the future and it is ugly indeed. African Americans need to hold themselves in readiness and prepare thy selves for the coming armageddon.

Race war? In a way, yes, but not in the way you might imagine.

This week we saw a YouTube video headlined on Drudge of a black woman in Ohio talking about how President Obama gave her a free phone. Her delivery was very, shall we say, street or ebonical (if that is such a word). While her facts were a tab askew, her message was not. In a nutshell, "Obama gives me free stuff, Romney don't, next issue!" Once the video had gone viral many Romney supporters were galvanized while many Obama supporters sought treatment for a severe case of the Cringes. (Ask your doctor about once-a-day "Cringatol.") The Atlantic magazine, home of renowned gyno-journalist Andrew Sullivan, was the first publication from the left-wing media to blow the race-whistle asking "How Racist Is The Obama Phone Video?"

Hell of a question. The Atlantic saves valuable time by simply skipping stage one where we ask "Is it racist?" and puts all their eggs into the stage two basket where it's already decided, yes, it is.

The "Obama Phone" video is not being used by the Romney campaign. So we can't say that it's a racist attempt to get votes in the election. Right now, it sits in the middle ground between "stuff on the Internet" and "serious political issue." But it took one big step toward becoming a  serious issue when, on the same day, Rush Limbaugh played it repeatedly on his radio show and the Drudge Report posted it at the top of his page. They'd probably call it humor? Limbaugh finds a lot of things funny about Democrats, like how fat Michelle Obama is. And an Obama voter who seems to be dumb? That's comedy gold, or as he described the "Obama Phone" video, "That's not Saturday Night Live. That is a real Obama voter." Because a video of a black woman with bad teeth and a poor grasp of the history of the Universal Service Fund proves that Democrats are stupid, lazy, and, oh, black. "That is a real Obama voter." We say, that's racist.


Mmm! Lot's to do here. As expected from an outfit like The Atlantic, they take the words of a conservative and addend them with some of their own. Limbaugh points out the whole crux of the issue: this isn't a parody, this is real. And when he says "This is a real Obama voter." a true fact, that statement is racist.

It's a nice try and the standard stuff we see on an almost daily basis but I have to think that the wizards of smart have to be getting worried. There are a lot of video cameras out there. Every day bloggers are shooting video of real voters, real politicians with their tempers and there's no place to hide. The Atlantic says Limbaugh's statements are racist; I say, why stop there? Aren't we all racists by simply watching the video? Let's face it, once we hit the link on Drudge, it was the point of no return. We are all racists now. And since this video was not a parody, but in fact a real person, I have to think the biggest racist of all in this whole story is the woman in the video herself.

The left-wing media has made racism a cause célèbre, attacking conservatives, Tea Partiers and the like with charges of racism over some of the tiniest, most arcane statements you can make. Just this week a Charlotte, NC newspaper did an editorial cartoon with depicted black Carolina Panthers quarterback Cam Newton with a "Hello Kitty" t-shirt under his uniform. The inference: he's a pussy. To Stephen A. Smith and many in the media, it was racism.

So what's my point in all this? Well, as I said at the top of the post, it's time, maybe past time, when African Americans need to prepare for the day when liberals (left-wingers, progressives, et al) decide that black people must be eliminated or at the very least quarantined, for their very existence is in itself a racial stereotype. Is this not where we're headed? Yes, I'm illustrating absurdity by being absurd, but answer me this: where does it all go from here? It wasn't Limbaugh saying the woman had bad teeth nor, I believe, did he say she was stupid or lazy (though this video is good evidence). No, The Atlantic just inferred that in their tsk-tsking article. You see? No one is safe from falling into the racist trap!

This country is screwed.
- September 29, 2012
Email ThisBlogThis!Share to TwitterShare to FacebookShare to Pinterest
Labels: Race Baiters

This Week In A Nutshell

Peace For Our Time? Report: NFL And Referees Close To Deal 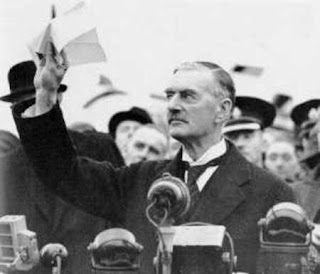 Per Chris Mortensen via PFT.
- September 26, 2012
Email ThisBlogThis!Share to TwitterShare to FacebookShare to Pinterest
Labels: NFL 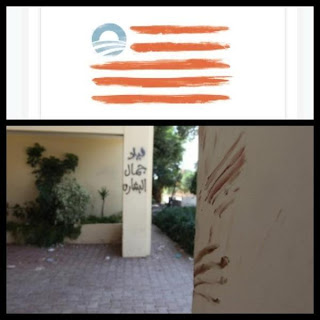 ...for giving me two more reasons to vote for Mitt Romney. 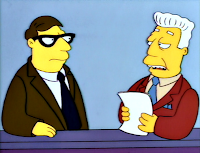 About 100 years ago, when The Simpsons was still a funny show, there was a great scene with their pompous newsman Kent Brockman:

Kent Brockman: When cat burglaries start, can mass murders be far behind? This reporter isn't saying that the burglar is an inhuman monster like the Wolfman, but he very well could be. So, professor: would you say it's time for everyone to panic?

Professor: Yes I would, Kent.


We find ourselves in a similar state as the Obama Media continues to feed us a daily diet of skewed polls in order to convince us the election is over and there's no point.

This Daniel Foster column is a few weeks old, but I think everyone should read it to get a better perspective on what we're up against. Here's a taste:

The sum total revealed a bizarre truth about swing voters. It’s not that they’re divided on any given issue, with half taking one side and half the other. Rather, everybody seemed to agree with everybody else about everything — and to disagree with them, too. Transitory coalitions formed and dissolved in what seemed a matter of milliseconds, like exotic particles in a supercollider. One minute, Latino Nose Spectacles was in complete agreement with Senior in Blazer. The next, they were at each other’s throats, and Young Yellow Dress had to team with Hair Gel to step in as the voice of reason. Working majorities seemingly assented to some premise, only to split a thousand ways on the most straightforward logical conclusion from said premise.

Everybody hates Congress, but most of these people either voted for their current congressmen or can’t name them. Everybody blames both parties for gridlock, but everyone also wants politicians brave enough to stand for their principles and against business as usual. Most call themselves moderates. One — one — describes himself as a liberal, and he voted for McCain and plans to vote for Romney. There were even those among them, reader, who liked Bill Clinton and Ronald Reagan equally. Such people aren’t so much swing voters as they are schizophrenic. It’s Schrödinger’s electorate.

The bad news is that these people are going to determine the election.