Really interesting video or "vlog" from Penn Jillette concerning a recent encounter with one of his idols, Tommy Smothers. First some background. Jillette, the talker of the comedy-magic team Penn and Teller is known for being an outspoken libertarian. This has led him to have much in common with conservatives and liberals...but as you know, true believers always have a purity test, so to liberals he's a conservative, to conservatives he's a liberal and never the twain shall meet.

Tommy Smothers, along with his brother Dick, make up the comedy act, The Smothers Brothers, which had a show on CBS in the 1960s. Both are outspoken liberals who generated a lot of controversy on their show with anti-Vietnam War, anti-Nixon, anti-anyone to the right of George McGovern rhetoric.

For Jillette, Tommy Smothers, the comedian, is someone he grew up idolizing. Recently, they were on some sort of talk show together and the subject of Penn's appearance on the Glenn Beck show came up. In the video, Jillette explains how it went to hell (WARNING: Strong language):


From Crackle: Getting Yelled At by One of My Heroes

Now, I'm generally a compassionate person, so I can't be too hard on Penn here. You can see with his dramatic pauses that he's coming to grips with the fact that his idol is an intolerant jerk. He tries to rationize it because in his heart, Tommy Smothers - his hero, who he's placed on a high pedestal - must be right. Penn knows the truth, however. You can see it in his eyes. 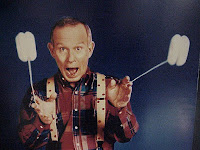 It exposes one of the biggest lies in pop and political culture: that liberals are tolerant and compassionate people. Nothing could be further from the truth. They are vile, mean-spirited individuals who want their point of view forced on everyone around them. Anyone who disagrees them is beyond contempt. There is no "agree to disagree" for liberals, progressives, or whatever they want to call themselves. Penn knows this, but it will take him a while to come to gripes with it. When your idols let you down, it's almost like a death, and you have to go through a period of mourning before you can move on. (Hat tip: Big Hollywood)